This Dushka 12.7mm AAMG is attached to the Andreivian Turk Regional HQ attacking Tuzkhur.  It's a Viet Cong team by SHQ (I think) but it'll pass as Andreivian in the heat of battle.

One of the rebel factions, meanwhile, has this Red Star BMP-2.

Finally, one of the "Wandering Monsters" in the game is this US Army PsyOps team.  All of my modern America figures are a mix of Revell and Esci plastics.  The Hummer is a Dragon ready-made.

Some thoughts on the Rules - keeping things moving

I'm going to be running the Battle for Tuzkhur using Arc of Fire. These are rules I know really well and so can run confidently. I really want the game to bowl along at a good pace.

Bob Mackenzie would suggest this is unlikely to happen because AoF uses a card-driven turn sequence. However, I am confident that I can tweak the system to address his concerns.

As Bob suggests, there can be problems using card-driven systems in multi-player games. This is the definitely case if the system allows only one player to be active at a time and all the others are standing and waiting. However, I think we an get round this quite nicely.

Arc of Fire usually activates each unit twice a turn – each unit has a pair of cards in the deck - for example on both red Aces. However, it is common practice for a given pair of cards to activate more than one unit – it's part of the subtlety of the system in capturing different degrees of command co-ordination. In our long and thin game we can take this further. The only important factor from a game-play point of view is that opposing units in the same sector aren't activated at the same time.

My experience is that AoF games bowl along nicely as long as there are no more than about eight pairs of cards in the deck (plus the Jokers). So let's activate several sectors' worth of units on each card pair. There's no reason why the Ace of Spades shouldn't simultaneously activate American tanks in one part of the field, a French Special Forces snatch squad in another, and an NBC TV crew in a third.

Another concern with card-driven systems is that everyone has to wait for the slow player to complete his turn. This could be exacerbated in the system I've described. If, say, Black 2 activates two units carrying out lengthy fire-fights or complex manoeuvres, then some players will be left as spectators awaiting the next card. In reality, though, I've found this not to be the case when you have a referee. He can usually leave a slow player to get on with moving his unit and take a sneaky peek at the next card. Often this can be revealed without interfering with the flow of the game.

In a big game like the Tuzkhur Valley battle there is the danger of things being even slower at times when there aren't enough players to go round. Frankly, I have no idea how many players we'll get so there could well be many times when there is someone around to move, say, the American main force and their immediate opponents but no one to progress the fighting in and around Tuzkhur town. So be it. Most of war is sitting around waiting punctuated by short periods of terror. I have no problem ignoring the more static portions of the battle for a few turns while we concentrate on the exciting stuff.

In fact this approach brings its own advantages. These "static" portions of the battle provide ideal settings for passing players to play for a short while and get a feel for the game, the rules or whatever else interests them without having to commit for hours at a time.

Finally, I'd like to point out in defence of card-driven systems that the non-phasing players are rarely completely inactive. There are casualties to determine and mark, morale tests to take and often considerations of whether to attempt opportunity fire.
Posted by Counterpane at Monday, February 25, 2008 No comments:

Click for a larger picture. These are Revell and Esci modern US infantry and a pre-painted Dragon M2 Bradley. The building in the background is home made and has previously seen action in Lebanon and Chechnya.

This is the main NATO task force spearhead.

Posted by Counterpane at Thursday, February 21, 2008 No comments:

I've started photographing the US and other NATO forces that'll form the main body of the Tuzkhur Valley task force.
First is a Dragon (ready made) M1 Abrams with mine-plough (plow to the Americans). As usual click on the photo to see a larger image.

The second echelon of the US force includes these M113 APCs. Again these are ready-mades, this time from Easy Model.

And here's a Bradley IFV and the dismount element of its squad. The early 1990s squad organisation for Bradley squads was for a six man unit. It made no allowance for breaking down into individual fire and movement elements (or fire teams). This is convenient for our game as it speeds up play.

And finally, some British chaps. Who knows what they will be doing? I ain't saying.

Posted by Counterpane at Monday, February 18, 2008 No comments:

One of the aims of setting up this game was to allow other players to contribute to the forces we use. Richard Baber has excelled himself and provided a Spanish force that will play an important role in the NATO rescue operation.
Here is the first squad.

They'll ride in this M113. Really nice paint job by Richard I think you'll agree. It'll be interesting to see how far an M113 with a pintle mounted HMG can function as a tank against light infantry forces. Or are they just light infantry forces? It's reported that Andreivia got some surplus T-72s from Czechoslovakia.... 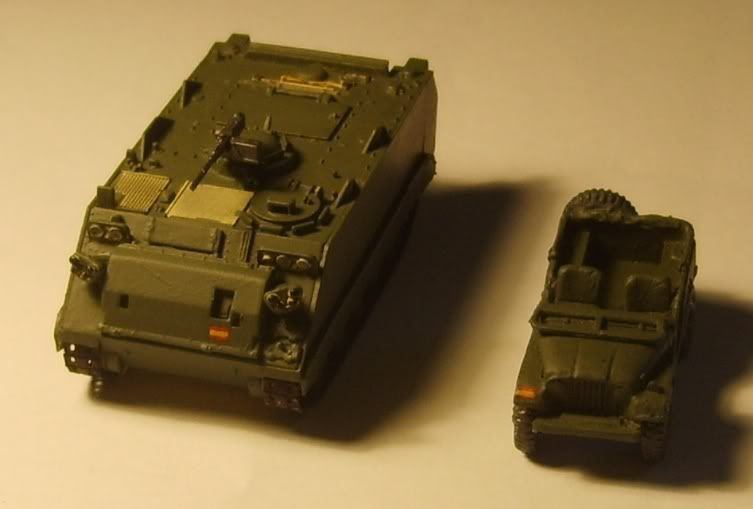 The Jeep will be used by the HQ unit (below). 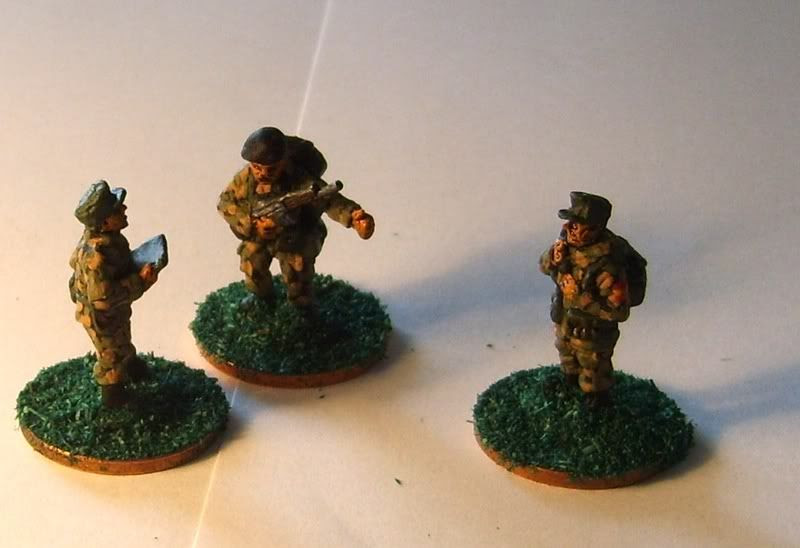 Posted by Counterpane at Monday, February 18, 2008 No comments:

My pleas for stout chaps to lend a hand at Gauntlet have not fallen of deaf ears.

Rob Connolly was a tower of strength last year and is promising once again to keep the warriors supplied with suitably ethnic cakes. Now we just need to find some Andreivian cake recipes. Oh, and Rob says he’ll be familiar with the rules too.

Richard Baber, the editor of SOTCW’s magazine The Journal has gone beyond the call of duty and is bringing a force of Spanish UN peacekeepers and some Andreivian rebel types. Piccies to follow.

And now Pete Jones, a stalwart of past SOTCW gatherings and North Wales local, has also volunteered.

I reckon with four of us we can keep the game bowling along at a good pace and still have a fun, relaxed time. That doesn’t mean there isn’t still plenty of space for more heroes!
Posted by Counterpane at Monday, February 18, 2008 1 comment:

If the Tuzkhur valley game is to be four tables in length (that was my initial plan) I'll need at least 24 feet (7.3m) of roads.  So I decided to do some roads made from foamcore.  I can get quite a lot from work (design companies tend to use it for mounting proposals and after you've decided which set of designs you like you're left with acres of the stuff).
I cut 12 feet of road sections with chamfered edges and then painted them with textured exterior masonry paint for that gritty, tarmac effect.

Sadly, they all warped, turning into attractive, but useless, smily shapes.
I shall persevere for a bit - it's worth getting some experience with the materials and I might be able to save them but it looks like I may be on the scrounge for road sections as the day grows nearer.

Posted by Counterpane at Saturday, February 16, 2008 No comments:

Battle in the Tuzkhur Valley (the background)

Andreivia, on the shores of the Black Sea, was, in the early 1990s, a nation emerging from years of communist domination. With the collapse of central control came ethnic tension and eventually all-out civil war. Orthodox Andreivians, Moslem Kurds, Armenians and Turks seemed to have a shared desire to soak Andreivian soil in the blood of their enemies.

Two factors gave these events a wider significance. Andreivia bordered Turkey (and hence NATO) and she hosted vital pipelines connecting the Caspian oilfields to the Black Sea. In the circumstances an American-led intervention was inevitable.

The Tuzkhur valley runs from US-occupied southern Andreivia to the town of Tuzkhur on the shores of Lake Kikhide. Although the Americans have no immediate plans to control the valley, news has come that foreign civilians (including some Americans) are trapped in the town.

Already overstretched pacifying his base area, the NATO commander has tasked a small US-led force with heading down the valley, rescuing the expatriates and returning them to safety.

Unfortunately for the US force, the Tuzkhur valley is already a battleground. Andreivian Turk forces hold the upper reaches but firefights with their Armenian enemies are frequent. The town itself is largely under Armenian control but a few beleaguered elements remain loyal to the central government. Speaking to the Central Committee in the capital Tcherbevan, President Memev has unconditionally opposed the NATO “invasion”.

It seems the rescue force will be venturing into the midst of an unpredictable, three-sided battle.
Posted by Counterpane at Friday, February 15, 2008 No comments:

I've done some crew for the Andreivian Government gunboat on Lake Kikhide. I decided to follow Nik Lloyd's approach of putting the crew on a plastic card "cassette" that can be removed if the vehicle is unmanned.
The figures are Revell plastics from their Kriegsmarine crew set.  The seated figure has been the victim of a head-transplant.
Posted by Counterpane at Friday, February 15, 2008 No comments:

The first models finished for the game represent (some of) the Andreivian Government forces in the Tuzkhur region.

Andreivia bought some Type 61 tanks from Japan in the 1960s.

Also present are some students of the Dvimin Military Academy. These are ancient Airfix German Infantry from the early 1960s.
Under development is an Andreivian Navy patrol boat converted from a kid’s toy I picked up cheap in a flea market.

Posted by Counterpane at Thursday, February 14, 2008 No comments:

Not Another Wargames Blog?

Yes, I've decided to try my hand at this blogging lark. The plan is to let you know of the plans to develop a participation game to be run by members of the Society of Twentieth Century Wargamers (SOTCW) at the Gauntlet wargames event in north Wales in July 2008.

The idea is to put on a game that lots of people can join in with. The game should support people who want to come along and play in the game for the whole weekend as well as people who want to give it a go for an hour or so. It should also be flexible enough to cope with people saying, "I'm coming, and I'm going to build a unit like this...".

I expect this to blog to grow pretty much at random as I cobble together more details of the scenario, set up and forces involved. I won't be revealing all of the scenario details but I hope to show enough to spark some interest.