I've just finished a flying stand that can be used to carry aircraft as they roar over the Tuzkhur Valley.

The idea is pinched from Simon Miller's "Crimson Bat" model for Gloranthan Hordes of the Things.  Basically it's a foamcore and card model based on a CD.  The building contains a few dozen unwanted lead figures and a load of tile grout to give it some stability.

The chimney extends into a variable height flying stand that's made from one of those extendible magnet things - like a car aerial and designed to pick up metal objects from inaccessible spaces.
Each of my aircraft has a small magnetic coin glued to its underside (I use Latvian 1 Santims pieces but modern British pennies will do the job too).   This allows you to mount the aircraft securely on the stand at any appropriate height from about 15 to 60 centimetres.

This final pic shows an Andreivian Air Force A4 Skyhawk flying low over a typical Andreivian house.
When I get some better pics done this will be my entry to The Guild's scenery group build.
Posted by Counterpane at Tuesday, May 27, 2008 No comments:

I've edited the Intro to Arc of Fire posting (beginning of May).  Our Senior Assistant Vice President in charge of Rules Consultation (Mike Reese) pointed out that I got the section on "Moving Out Of Turn" wrong.  It's now fixed.
Thanks Mike.  You'll be listed in the credits!
Posted by Counterpane at Tuesday, May 20, 2008 No comments:

I went over to visit my parents in Merseyside this weekend and that meant a chance to pop over to what used to be called "The Model Shop" (now Kit Stop Models) in Birkenhead.  I used to go in there as a kid when I remember it as an Alladin's cave with Airfix and Tamiya kits all over the place.
Generally, it's a mistake to go back.  The shop is now bright and airy, and fairly well stocked but no longer has the magic of the old place.  Or am I just getting old?  Still, had a nice chat with the owners and have promised it won't be another 30-odd years before I go back again.
I had in mind to pick up maybe an A10 Thunderbolt to provide the NATO forces with air strike capability.  As it happens I decided to pay half the price and get a Jaguar GR1A from Revell.  I'm going to start building it tonight.  Photos when I get it finished.
Posted by Counterpane at Sunday, May 18, 2008 1 comment:

It may not be long until the U.N. bring a resolution about for a limited UN force to enter Andreivia ,meanwhile, news agencies are clambering to cover the conflict.

Recently sighted was this CNN news crew. If you notice they have painted their SUV white with large TV markings on it hoping they aren't targeted. The 3 members of the crew are all wearing blue coloured body armour for protection. 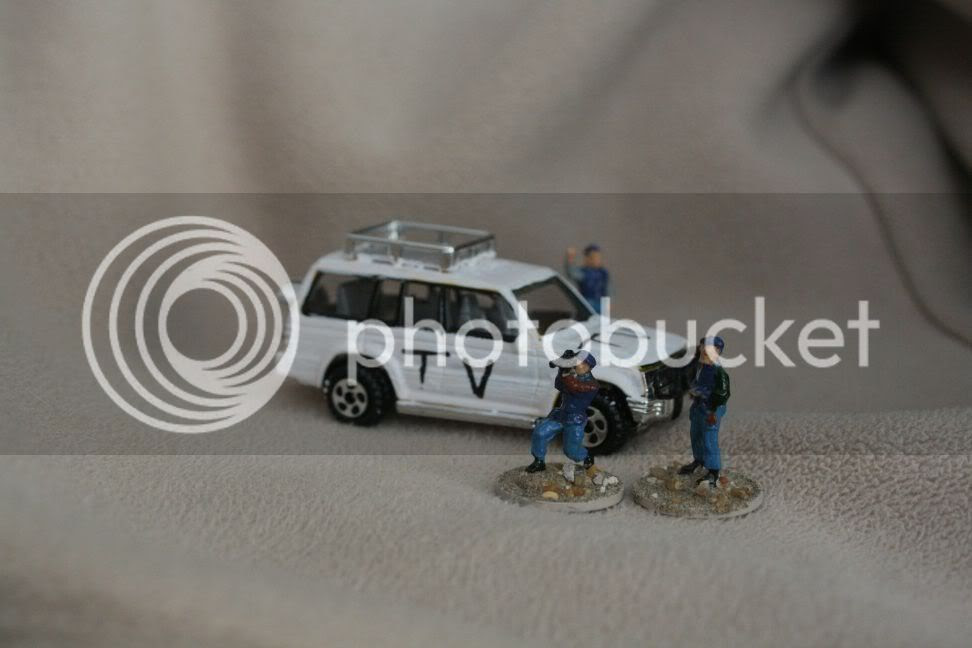 Last night I had an email from Ian Shaw (of the Deeside Club and SOTCW) offering to lend yet more modern kit for the game. Frankly I am overwhelmed by all the offers of toys to play with - we now have more offered than we can possibly use!

My plan is to use at least one item from each person. I'm also going to publish a "Cast and Crew" list for the game. I'd like to ask all participants to make sure I have their full name so I can make sure everyone gets due credit.

The main need now is for players! Of course you can turn up on the day (either day) and play but I'd also like to hear from people in advance. Comments here or via the SOTCW Forum or mailing list, the Deeside Defencers list or The Guild are a good way to contact me.
Posted by Counterpane at Friday, May 09, 2008 3 comments:

19th century – successfully avoids integration into the growing Russian Empire but is a battleground during the Russo-Turkish War.

early 20th century – the Armenian population is swelled by refugees fleeing Turkish persecution. There is some inter-ethnic violence.

WW1 – sends a small expeditionary force to fight against the Germans on the Eastern Front.

Russian Civil War – King Alexei V is deposed in a coup and Andreivia briefly joins the Trans-Caucasian Republic but withdraws before the Republic is swallowed up by the Soviet Union. In 1924 the King is invited to return.

1941 – Hitler invades the USSR. Andreivian Prime Minister Mishkin declares the Kingdom neutral and states that she will defend her borders against any attack. Mishkin flirts with the Axis side and a volunteer Andreivian Legion fights with the Germans in Russia. Many Andreivians also join the Red Army and eventually a Regiment of Andreivian Riflemen sees hard fighting in Hungary.

1945 – Soviet Forces occupy Andreivia and install a Communist regime under Istvan Sakhvashev, the highest ranking Andreivian in the Red Army.

Post War – Sakhvashev proves to be a skilled diplomat and successfully rebuffs attempts to integrate Andreivia into the Soviet Union. Subsequently, he even wins for the nation a special status in relation to the Warsaw Pact. Andreivia does not receive the benefits of a large Soviet military presence.

early 1990s – The death of President Sakhvashev and the dissolution of the Soviet Union trigger a scrabble for power within Andreivia and the resurgence of ancient ethnic rivalries. Ivan Dzhugashev is elected President but many Armenian and Turkish delegates boycot the Party Congress.

This year – Dzhugashev proclaims Andreivian to be the sole national language and calls for a renewal of Andreivia's national identity as an Orthodox Christian Republic. Andreivian-Armenian Deputy Serj Benkian declares the republic dissolved and calls for an uprising to establish an Armenian Republic in Eastern Andreivia. Achmed Karamanoglu, professor of art history at Tcherbevan University makes a similar call on behalf of Andreivia's Turkic people. Fighting breaks out throughout the country.

This week – The charming, lake-side town of Tuzkhur sees heavy fighting. Benkian's Armenians hold most of the town but they are being shelled from the surrounding hills by Andreivian-Turkish artillery. Elsewhere, the main NATO effort is aimed at clearing a corridor to bring humanitarian relief to the capital Tcherbevan.

Today – A small NATO force is tasked with breaking through to Tuzkhur and rescuing trapped foreigners.
Posted by Counterpane at Thursday, May 08, 2008 No comments:

Sorry about the vanished pictures.  My photos are hosted at Imageshack.us which seems not to be working at present.  I may have to find an alternative if things don't improve.
Posted by Counterpane at Monday, May 05, 2008 No comments:

An Intro to Arc of Fire

I thought it might be useful for anyone thinking of joining us for the game to have a brief outline of how Arc of Fire works.

Units have a TAC score from 4 (the best) to 8 (the worst). TAC represents training and general tactical competence. In addition to TAC each figure has a Morale score. Again 4 is best, 8 is worst. Figures roll against their Morale to avoid being pinned down by incoming fireand to recover from being pinned down (Broken). Units also roll against Morale at the end of the turn. Morale is rolled on a d10 (or a d6 if the figure is wounded).

At a given range (in inches) a weapon has two factors, say 5/7. The first is against soft targets (people), the second against hard targets (vehicles including trucks, bunkers etc.). Roll as many d10 as indicated (e.g. SMGs roll 3 dice). With our factor of 5, a roll of 5 (the number required exactly) causes a Morale check. Rolling 6 also causes a Morale check but at -1 to the die roll. A roll of 7 is a wound and 8 or more takes the figure out of the game (either dead or seriously wounded).

At the core of AoF is its card activation system. The sequence in which units are activated is determined by turning over playing cards. Each unit in the game is activated on two cards. So, for example, it might be that the Andreivian Turk AAMG team is activated on both of the black Aces. In our case, any particular pair of cards will activate several units at different locations.

Moving Out of Turn

In AoF, units can act out of turn by one of two methods. A unit can use Opportunity Fire to engage enemy units that move within sight.  This is subject to three provisos - (1) the firing unit must be in Defence Mode, (2) it must spot the enemy and (3) it must have a card left to play remaining in the deck.   By using Opportunity Fire it sacrifices its chance to move on its next card.

Alternatively, a player may hold on to one card as an “initiative card” to be played later.  This can be used to interrupt another unit's turn but it requires a successful TAC to achieve.  In our game Initiative Cards are limited to one per player at any one time and they only apply to one unit at a time (any additional units activated on the same card are activated as usual).

Arc of Fire units are always in one of three Modes - Advance, Defence or Confused.

That'll do.  You'll pick it up easily enough.
Posted by Counterpane at Friday, May 02, 2008 No comments: