The story of the battle Hill 154 and the tragic fate of the heroic Andrievian Turk volunteers who went to the aid our brothers of the Turkish army as told by a wounded survivor who has just made it back to his village.

After receiving information that there was going to be an attack on the Turkish radar site on Hill 154 we small band of volunteers, armed only with light automatic weapons and grenades, set out to fight alongside our Turkish brothers.

After a long hard march across the desert we caught sight of the hill and its radar site.  The Andreivian forces were already making their attack.  We decided to make for a low rocky hill within range of the radar hill, where we would set up a base of fire to provide support for the defenders of the site.  We approached with caution fully expecting the Andreivians to have set up their own base of fire on the hill.  But no, the hill was unoccupied! We quickly took advantage of the cover on the hill and took up firing positions.  Before us the battle raged.

To our front the Andrievians with infantry, a tank and APC were on the approaches to the radar site and were fully occupied trying to attack the site while also trying to prevent interference from a large band of, very well equipped, Armenian bandits.  The Turkish defenders seemed to be in some confusion, leaving their bunker, sometimes firing a LAW, retreating back inside before coming out again.  From the safety of the bunker they successfully wiped out an Armenian unit that had just reached the first large plateau on the hill.

To our left what looked like a reserve force of Andrievian gendarmes were milling about.  We don’t know if we were spotted but this reserve unit started to move away from our position, moving into line of sight of the observation slits. They were subjected to fierce plunging fire from above and retreated back towards our position.  This was our chance. We opened fire and hit ….. nothing.  We did however, attract the attention of the Andrievian command, who called in an airstrike.  An Andrievian Skyhawk streaked over our position. The bomb landed in our centre but we were such good cover that only two of us were wounded.

In the meantime the Andrievian tank was pouring shot after ineffective shot at the radar bunker and their infantry were struggling to get through the wire.

After recovering our senses we turned out attention to the Andrievian reserve again.  Our next two bursts of fire put paid to them.  Our next objective was to join our Turkish brothers on the hill to help them fight off any further attacks.

In front of us, on the lowest slope of the hill, the Andrievian and  Armenian APCs had been fighting at point blank range.  This fighting became confused.  The Armenian APC caught fire and their infantry swarmed over the Andrievian APC.  A sudden catastrophic explosion ended this fight as a NATO jet thundered in and scored a direct hit on the melee.  The Armenians had had enough they fled the field.

On the hill the Andrievian tank was manoeuvring around to try to get a shot at a more vulnerable part of the bunker.  Suddenly there was a mighty crack and the tank exploded. Had the Turkish LAWs finally hit their mark?  Anyway it was problem solved for us. By this time, the Andrievian commander had personally led his troops over the wire and was sheltering in a dead spot at the wall of the bunker.  Not for long. The Turkish infantry came out again and wiped them out.  We prepared to join our Turkish brothers.

Our commander wanted us to move but because of our position in thick cover we became confused and it took a while to organise ourselves.  Finally we moved.  Most of the group broke cover and moved across open ground.  Only I, and my wounded comrade became separated, moving slower because of our wounds and didn’t clear the cover of our hill.  Suddenly a boxy APC appeared around the corner of the escapement to our right.  NATO infidels!  A few of our number got off a quick burst of fire.  The APC stopped dead.  Unfortunately it was not alone and two more APCs appeared.  Heavy machine gun fire started to land among our group.  Tragically the Turkish troops opened fire in support of their NATO allies and our brave little band of heroes was destroyed.

Posted by Counterpane at Monday, February 23, 2009 No comments:

At the start of the game, Andreivian Army vehicles approach the radar station. The BMP-2 (left) would lure the Turkish defenders into firing off all of their 66mm anti-tank rockets to no effect. 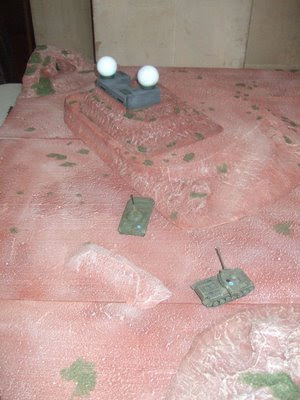 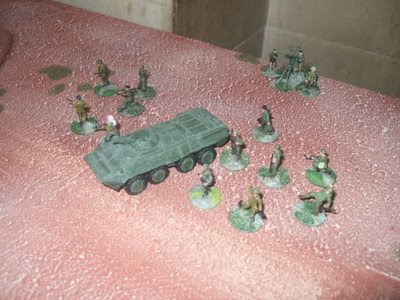 So, we did manage to put on a game at Hammerhead and it went pretty well though I say so myself.

The game saw various Andreivian factions squabbling over a Turkish military radar station on Hill 154. The Dagras Hills (south east of Lake Khikide) are a disputed area currently occupied by Turkey but long claimed by Andreivia.

My desert terrain saw service as the Dagras Hills (actually it’s now Rob’s desert terrain as he’s bought it off me) and I built a new radar station with two golf-ball radomes. Cobbled together from hardboard, polystyrene packaging material, tile grout, an old Airfix coastal defence fort and, yes, two golf balls, it looked the part and provided a nice centrepiece to the game.

The action kicked off with Rob’s Andreivian Government force (HQ unit in BMP-2, Gendarmerie infantry squad and a Type 61 medium tank) advancing rapidly on the radar station. Very rapidly as it happened as they picked up a random event that boosted their speed for one turn. The Type 61 was soon parked close to the blank side wall of the station. From here it repeatedly failed to do any significant damage!

The Turks in the radar station displayed considerable indecision. Stuart Adams had them running around like headless chickens while they tried to decide which of their two sub units was best placed to drive off the attackers.

Meanwhile, Phil Gray’s Andreivian-Armenians were approaching from the other side of the station. They soon got into a fire-fight with the Andreivian Government forces. Eventually their BTR-70 was knocked out by point blank cannon fire from the government BMP-2.
Elements of the local Andreivian-Turk militia were also present. Under Steven Carr’s command , they advanced patiently through the rough hills and took up a good firing position some 200 metres from the radar station. They achieved this despite being bombed by an Andreivian Air Force Skyhawk piloted by “Tardis”.

More later on this along with photos and the full low-down on Rob’s suitably ethnic cakes.
Posted by Counterpane at Monday, February 23, 2009 No comments: